Maree began circus classes 9 years ago whilst in high school, after a year she joined Zany Yare Youth Circus to increase her skill level as a circus performer specialising in acro-balance and clowning. Since then Maree has performed at events such as Ironfest, Winter Magic, Lithgow’s Halloween, Australia Day events and many more. Maree has trained at Circus conference Catapult Festival and Bathurst Clowning Workshops as well as many master classes. For the last three years Maree has also been a assistant trainer to the Zany Yare Youth and Primary class providing supervision and training.

Maree is a qualified diploma trained child care worker who is currently furthering her studies to obtain a bachelors in early childhood education and has combined her love for circus with her studies. Maree has worked with all age groups for the past 7 years from 0-18 years though mainly working with 0-6 year olds in both long day care centres and as a nanny where she has been able to introduce many children to circus activities, she also spent time working in a before and after school care centre and also as a Youth Worker. While completing her traineeship in child care, Maree implemented programs at a before and after school centre encouraging children to get active through fun circus based activities. Maree developed a circus program and taught many circus classes for a Youth Centre engaging teenagers in a wide variety of circus based activities and experiences. 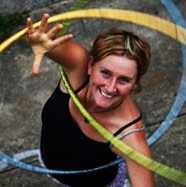 Tahmour is a circus performer and trainer specialising in hula-hoops, juggling, acrobatics and clowning. While she was completing a Bachelor of Arts in Drama / Film she spent a lot of time juggling. Was this purely for the distraction or did it have some deeper cause? The answer is clear to see! 7 years on she is still juggling and circusing her way around Oz and the world! In between finding time to share the things she has learnt over time with new circus keen beans.

Currently Tahmour tours two shows, one in schools to regional Australia, and the other to streets and festivals all over the world!

Some of her favourite projects have been; touring with a clown show in Guatemala educating about HIV; school and charity clown shows in India and Honduras; and busking at the Adelaide Fringe Festival, and in Belgium and Norway.

Tanya Richards has been involved in the circus arts industry for 16 years and has been working as a professional freelance performer for 14. She has trained with ATYP, the Flying Fruit Fly Circus, Acrobat, Legs on the Wall, Nat Harris and Aerialize. Tanya has performed and tutored for companies such as Out of the Blue, ERTH, ATYP, The Flying Fruit Fly Circus, Legs on the Wall, and Aerialize. She also founded the Lower Blue Mountains youth circus ‘Zany Yare’ in 2000 and continues to run the circus troupe. Some of the festivals Tanya has performed at include Ironfest, Sydney Fringe Festival, Hoopla, We Love Sound and Vivid.

Alongside her career as a freelance circus performer, Tanya Richards’ works as a contemporary artist whose current art practice revolves around video, performance and installation art. She completed a Bachelor of Fine Arts Degree with Honours First Class, and a Doctorate in Creative Arts at University of Western Sydney. Richards has been exhibiting since 2000 and has exhibited at Casula Powerhouse Arts Centre, Blacktown Arts Centre, Artspace and internationally at Singaporean gallery Substation. She has also exhibited in a variety of artist run spaces such as Don’t Look Gallery, First Draft, Space Three and Vanishing Point.